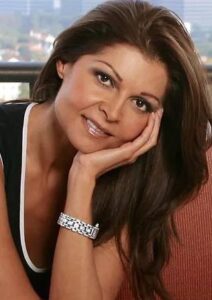 AM: Ms. Nassery Cole, it’s a pleasure to have you with me today. Thank you for your time. You are an activist, director, writer and producer. You have received numerous accolades for your humanitarian work. You currently serve as Chairman and CEO of the Afghanistan World Foundation (AWF). Can you elaborate for our readers who are not familiar with AWF’s body of work?

Afghanistan World Foundation is a non-profit 501c3 organization that I founded in 2002 that is so very close to my heart. Our action programs are based on high priority survival needs in Afghanistan, such as education woman empowerment and fighting for woman’s rights, and emergency health services. We build hospitals, mobile care systems, and enhance social opportunities for Afghan women and children. Right now our focus is on the severe violation of woman’s rights, raising awareness for the plight of the Afghan woman.

AM: What can our readers do to assist AWF in its mission?

All I can ask of anyone is to please donate. All AWF employees are volunteers who believe when woman’s rights are violated anywhere they are violated everywhere. If this is something you believe, then please donate. It is so desperately needed: http://www.afghanistanworldfoundation.org

AM: You escaped from Afghanistan as a young woman. Can you share with our readers your view of the current refugee crisis in Europe, based on your life experiences? What, if anything, do you think our readers should know about the refugee crisis as it relates to AWF’s work?

We at AWF are not involved with the refugee situation in Afghanistan. The refugee crisis in Afghanistan, Syria, Africa etc… has become a personal mission in my life. We cannot sit idle and watch as people get treated like this. We are all reading the news and as hard as it is to see, I want to know every grueling detail of what is going on with the refugee crisis. My soul hurts for these people, their children, and their future. Imagine you live in NYC and the city becomes inhabitable. You are a doctor, your spouse a lawyer. Everyone has died around you, and anyone left is looking to escape. No one is working, everyone is hungry and there’s no government support. You have no choice, but to make the decision to escape to Canada. Upon arriving, they will not let you in because a Catholic extremist bombed a Temple and killed 30 Jewish people. Your family has no where to go, no food to eat and eventually pass away. What would you do? For more information on the situation that we almost never see on the news anymore, go to my page: https://www.facebook.com/Sonia-Nassery-Cole-Page-292102007789486/)

AM: In 2010, your film The Black Tulip was selected as Afghanistan’s Best Foreign Language Film

submission at the 83rd Academy Awards. Tell us how it felt to bring the story of an Afghani family, and by extension, a nation, trying to rebuild their lives after the fall of the Taliban to the silver screen? What challenges did you face making this film?

To have the freedom to show my perspective of a country that I was raised in, brings me so much joy. People have these large misconceptions of what Afghanistan is really like, now and before 1979. Bringing this story to life was bringing my country back to life, showing the viewers a whole different perspective of what the country still has to offer. Afghanistan was one of the most sophisticated countries with highly educated people. Women had their liberation before American woman knew what it was. It is very misunderstood today. My country was one of the most beautiful places in the world with thousands of years of history and culture with one of the oldest civilizations in the world where Buddhism started. It will always be my home.

Additionally, this is a difficult question because there were thousands of challenges. And, there was no way to know what new ones would arise. The only way I could respond is to tell you, I wrote a book titled Will I Live Tomorrow that outlines the terror my crew and I endured by the Taliban while making this film.(link to book amazon) In general, it was hell on earth and a miracle that my crew and I survived to tell the story. I am so thankful that I had the most amazing support from my son. He was so inspired by the making of The Black Tulip that he decided to attend Columbia University for his masters in film: https://www.amazon.com/Will-Live-Tomorrow-Anti-Taliban-Afghanistan/dp/193952914X

I was absolutely, blown away. I did not make this movie for the Oscars and film festivals. I made this film because of my passion for my country and my people. I wanted the world to see Afghanistan for all of its true beauty and beauty of my people. Not as a war zone, men with guns, and woman with burkas. My film portrays the reality of what Afghanistan is really like after 30 plus years of war.

AM: What other films, if any, are you working on now and when can we expect to see them?

I am working on several projects. The Hijack of Islam is a documentary I feel very strongly about. It speaks of what is happening to Islam, and what we can do about it. The documentary is a calling to 1.6 billion Muslims to rise up and denounce ISIS, Al Qaeda, Islamic brotherhood alike, as well as to take the word Islam away from them. The title speaks for itself, these terrorists are destroying the religion and dividing the world. Frakhanda is a documentary about a story of an Afghan woman getting beaten to death after being wrongly accused of burning the Kuran. The story follows many of the woman involved in her burial as well as the woman who witnessed the terrible event: https://www.youtube.com/watch?v=humHGdwFt8Q. Behind The Façade is going to be a commercial feature film with Hollywood stars. It is a story of the billionaires of the world, exposing the reality of their private lives. This film will be shot entirely in Capri, Italy.

AM: Your biography, Will I Live Tomorrow, has been hailed as a memoir about “one woman’s struggle to make a difference in a violent world.” Do you agree with that description? How would you describe your life’s story?

I believe that every single one of us can make a difference. Accomplishing this is my life’s work. Sometimes we get so bogged down with all the sadness in this world because there is nothing we can do about it. That is when we fail. It’s true, there isn’t anything we can do to help what is currently going on, but we can help change the landscape and make a difference. For me, personally making this film was a test of tolerance. A test of my own personal strength, my spiritual strength, and a test in my faith in God that justice will prevail. My life’s story is simple. Against all odds, if you truly believe in something you can absolutely accomplish it.

AM: This past year we lost Natalie Cole and Muhammad Ali. I know they were ardent supporters of AWF and celebrity ambassadors on its behalf. What can you tell our readers about them? How has their loss affected you personally and AWF?

I cannot express to you how much of a loss it has been losing both my best friend and hero to the Muslim people. Both Natalie and Muhammad were the most compassionate, caring, and loving people I have ever met. Natalie Cole was my best friend, losing her has left a hole in my life. There is not a single day that I do not think about her. As for her efforts in AWF, she was the most important board member. Since 2002 Natalie has worked tirelessly to help the Afghan people through entertainment, performing at major back tie events that AWF held along with Stevie Wonder and many alike as well as coming to Afghanistan for the premier of The Black Tulip in Kabul and performing at the NATO base for our troops. Natalie also helped me with visiting schools and Kabul and being readily available for any further support needed. She is irreplaceable.

Muhammad Ali was a hero of the world and a hero to all the Muslim people. He believed in all his heart that terrorism is wrong and that redirect should change. He spoke about it loud and clear. He was a true Muslim, a man of peace and unity. He is greatly missed by all of us.

AM: You have been blessed to have high profile celebrities and politicians, including a former US President support your humanitarian endeavors. What can you tell us about that?

The day I met President Ronald Reagan, I knew that I can, and will for the rest of my life, fight for my country and for human rights in general. He told me that one person can change the world and asked me, if I would like to be that person. I felt confident that if the President of the US thinks that I can change the world, then I most certainly can. That was a milestone that changed my future.I am doing what I can to fix injustice in this world. I was inspired to put in my best efforts, and do what I could to make a difference in this world, not only for my people in Afghanistan, but for all people. As for other ambassadors, we want our message to be heard and when celebrities speak, others listen. People listening feel like these celebrities can bring change. I am always honored and proud to have these people on my board as ambassadors. They have been an incredible asset to AWF: http://www.afghanistanworldfoundation.org/index.php?option=com_content&view=article&id=7&Itemid=203

AM: Are there any questions you feel I may have missed and would’ve liked to respond to? If so, what is your response to those unasked questions?

What is the purpose of life? We are here to give. Have compassion in your heart and empathy for humanity. The only thing on earth that makes me happy is giving. When I am at a speaking engagement or giving lectors people say its incredible what I have done, and that they cannot help, because they do not know how. I say everybody can do something. If you can make even the smallest difference in one persons’ life by helping them cross the street, giving a smile or even a hug, you are doing something. If we all do this it will be a much better world.

Thanks for subscribing! Please check your email for further instructions.

Something went wrong. Please check your entries and try again.
Scroll To Top